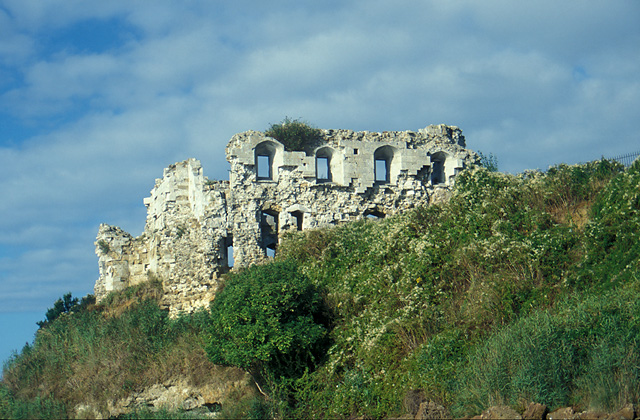 Location: Weymouth, Dorset, England.
Built: 1542.
Condition: Ruined.
Ownership / Access: Weymouth and Portland Borough Council, open to public.
Notes: Sandsfoot Castle, also known historically as Weymouth Castle, is an artillery fort constructed by Henry VIII near Weymouth, Dorset. It formed part of the King's Device programme to protect against invasion from France and the Holy Roman Empire, and defended the Weymouth Bay anchorage. The stone castle had an octagonal gun platform, linked to a residential blockhouse, and was completed by 1542 at a cost of £3,887. Earthwork defences were built around the landward side of the castle, probably in 1623. Sandsfoot saw service during the English Civil War, when it was held by Parliament and Royalists in turn during the conflict. It survived the interregnum but, following Charles II's restoration to the throne, the fortress was withdrawn from military use in 1665. By the early 18th century, Sandsfoot was in ruins, its stonework taken for use in local building projects. The clay cliffs on which the castle had been built had always been unstable and subject to erosion. The castle's gun platform began to collapse into the sea and, by the 1950s, had been entirely destroyed. The ruins were closed to visitors on safety grounds, although civic gardens were planted alongside it in 1951. Repairs were undertaken between 2009 and 2012 at a total cost of £217,800, enabling the site to be reopened to the public. Historic England considers Sandsfoot to be "one of the most substantial examples" of the 16th-century blockhouses to survive in England.

How To Get To Sandsfoot Castle (Map):