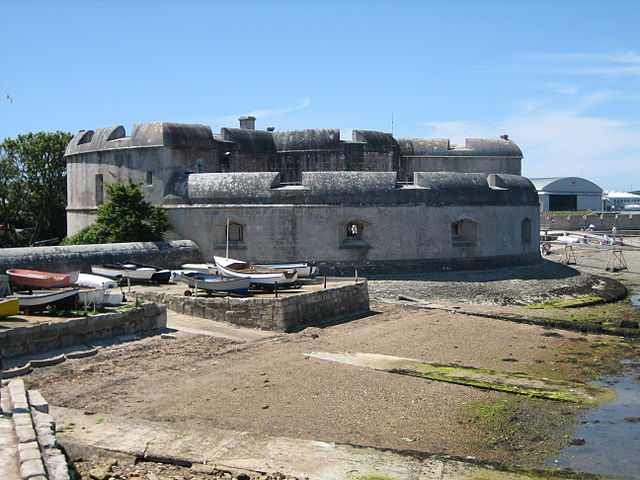 Portland Castle from the harbour side - Mark.murphy - Wikipedia - lic. under CC BY-SA 3.0

Location: Dorset, England.
Built: 1539.
Condition: Intact.
Ownership / Access: English Heritage. Open to public.
Opening Times: Check their website for more info.
Price of Admission: Check their website for more info.
Notes: Portland Castle is one of the Device Forts, also known as Henrician Castles, built in 1539 by Henry VIII on the Isle of Portland to guard the natural Portland anchorage known as the Portland Roads. The castle lies at the far north of the island, on the edge of the village Castletown, which was directly named as such from the castle. Its sister castle, Sandsfoot Castle is found across the harbour, west of Weymouth. It remains Dorset's only intact medieval castle, and one of the best preserved 16th century Henrican castles across the country. The castle has a diverse history beginning with its construction by Henry VIII to protect the anchorage from French and Spanish attack. It was involved in the English Civil War and later in the First and Second World Wars as a seaplane base and for the D-Day preparations respectively. Portland Castle experienced its only real action during the English Civil War 1642-1649. Being an historic Royal Manor, Portland naturally supported King Charles and was a Royalist stronghold. It is now under the care of English Heritage, and is open to the public during the peak season, usually closing in November until April. In 2007, it was announced that Portland Castle attracts 25,000 visitors a year. The castle was designated by English Heritage as a Grade I Listed building in May 1993. It is one of three buildings on Portland to be Grade I Listed. Additionally, in October 1981, the castle had become scheduled under the Ancient Monuments and Archaeological Areas Act 1979 as it appears to the Secretary of State to be of national importance. The Captain's House, which is within the grounds of the castle, was designated a Grade II* Listed building in May 1993. The gateway and curtain wall to the south east of the house became Grade II* Listed at the same time. It dates from the mid-16th century and is a surviving section of a former curtain wall with moat.Located around 23 metres (75 ft) south of the entrance to The Captain's House is a War Department/Admiralty boundary marker. Dating from the mid- to late 19th century, it is one of many markers of its kind to be found on Portland, and this particular example has been Grade II Listed since May 1993.

How To Get To Portland Castle (Map):