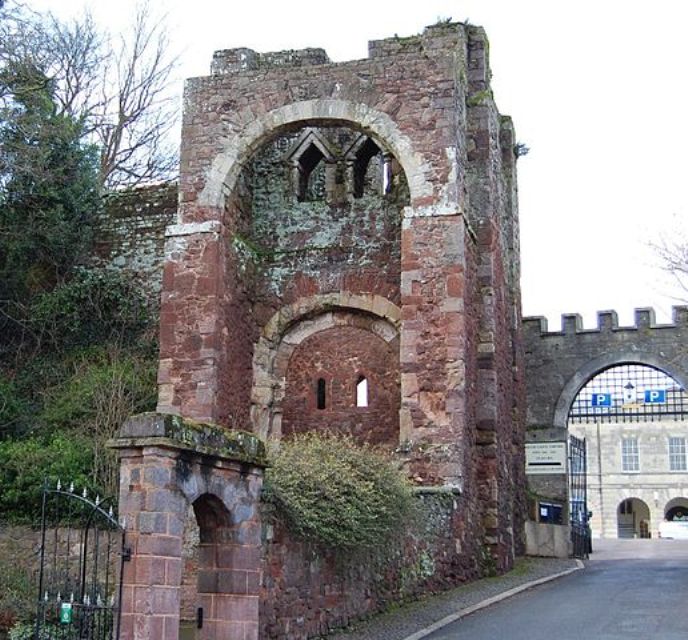 Location: Exeter, Devon, England.
Built: 11th-12th century.
Condition: Fragments.
Ownership / Access: Wedding venue.
Opening Times: Check their website for more info.
Price of Admission: Not free. Check their website for more info.
Notes: Rougemont Castle, also known as Exeter Castle, is the historic castle of the city of Exeter, Devon, England. It was built into the northern corner of the Roman city walls starting in or shortly after the year 1068, following Exeter's rebellion against William the Conqueror. In 1136 it was besieged for three months by King Stephen. An outer bailey, of which little now remains, was added later in the 12th century. The castle is mentioned in Shakespeare's play Richard III in a reference to that king's visit to Exeter in 1483. Devon's county court was located here from at least 1607, and the three Devon Witches the last people in England to be executed for witchcraft were tried here in the 1680s. All the buildings inside the walls were swept away in the 1770s to make way for a new courthouse, which was extended by the addition of wings in 1895 and 1905. Because of its function as a court, the interior of the castle was not open to the public until the court moved to a new site in 2004. The entire site has since been sold to a developer whose stated aim is to transform it into "the Covent Garden of the South West". The castle is named after the red stone found in the hill, and used in the construction of the original buildings, of which the large early Norman gatehouse is the main remaining feature. It is surrounded on three sides by the Rougemont Gardens and Northernhay Gardens, public parks now maintained by Exeter City Council.

How To Get To Rougemont Castle (also known as Exeter Castle) (Map):