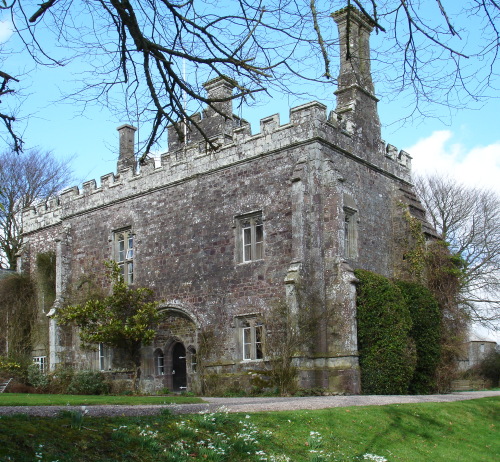 Location: Devon, England.
Built: 15th century.
Condition: Fragment.
Ownership / Access: Private.
Notes: Affeton Castle is a converted late-medieval gatehouse near East Worlington, Devon, England. It was formerly part of the destroyed fortified manor house of Affeton, situated on the side of a valley of the Little Dart River. Built in 1434, the surrounding house was destroyed in the English Civil War of the 1640s, and by the early 19th century the gatehouse was in ruins. It was restored between 1868-9 by Sir George Stucley, 1st Baronet for use as a shooting-box; in 1956, it was converted to form the private home of Sir Dennis Stucley, 5th Baronet. The castle, approximately 60 feet (18 m) by 22 feet (6.7 m) in size, is protected as a Grade II* listed building.