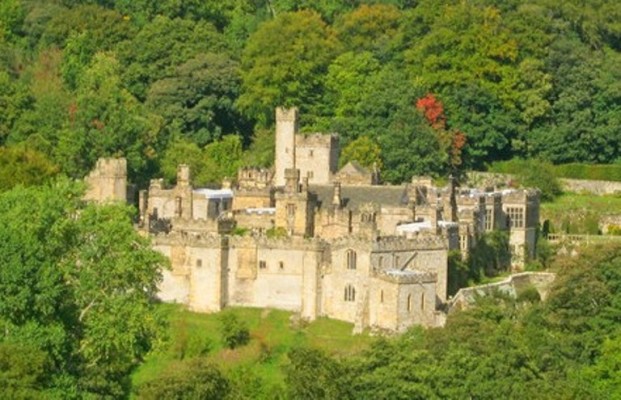 Location: Bakewell, Derbyshire, England.
Built: 14th-15th century.
Condition: Intact.
Ownership / Access: Historic House. open to the public.
Opening Times: Check their website for more info.
Price of Admission: Check their website for more info.
Notes: Haddon Hall is an English country house on the River Wye at Bakewell, Derbyshire, one of the seats of the Duke of Rutland. It is currently occupied by Lord Edward Manners (brother of the current Duke) and his family. In form a medieval manor house, it has been described as "the most complete and most interesting house of [its] period". The origins of the hall date to the 11th century. The current medieval and Tudor hall includes additions added at various stages between the 13th and the 17th centuries. The Vernon family acquired the Manor of Haddon by a 12th-century marriage between Sir Richard de Vernon and Alice Avenell, daughter of William Avenell II. Four centuries later, in 1563, Dorothy Vernon, the daughter and heiress of Sir George Vernon, married John Manners, the second son of Thomas Manners, 1st Earl of Rutland. A legend grew up in the 19th century that Dorothy and Manners eloped. The legend has been made into novels, dramatisations and other works of fiction. She nevertheless inherited the Hall, and their grandson, also John Manners, inherited the Earldom in 1641 from a distant cousin. His son, another John Manners, was made 1st Duke of Rutland in 1703. In the 20th century, another John Manners, 9th Duke of Rutland, made a life's work of restoring the hall.

How To Get To Haddon Hall (Map):