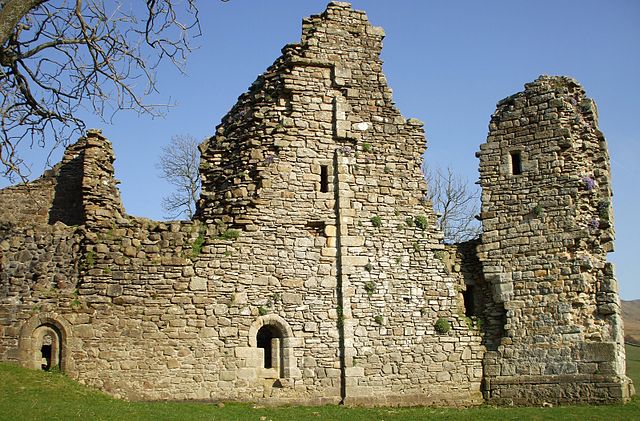 Location: Mallerstang dale, Cumbria, England.
Built: 12th–14th century
Condition: Fragmentary remains.
Ownership / Access: Castle open to the public.
Opening times: Check their website for more info.
Price of admission: Check their website for Admission prices.
Notes: Pendragon Castle is a ruin located in Mallerstang dale, Cumbria, close to the hamlet of Outhgill, at grid reference NY781025. It stands in an atmospheric spot above a bend in the river Eden, overlooked by Wild Boar Fell to the south-west and Mallerstang Edge to the east. It is a grade I listed building.According to legend, the castle was built by Uther Pendragon, father of King Arthur, who is said to have unsuccessfully tried to divert the river to provide its moat, as is recalled in a well known local couplet: "Let Uther Pendragon do what he can, Eden will run where Eden ran." Uther (if he was indeed a real person) was possibly a 5th-century chieftain who led resistance to the invading Anglo-Saxons. According to another local legend, Uther and many of his men died here when the Saxons poisoned the well (but other legends give St Albans as the location for his death). There are several other "Arthurian" sites in Cumbria, for example King Arthur's Round Table, near Penrith - and many names in the North-west, such as Penrith and Cumbria have Celtic origins.

How To Get To Pendragon Castle (Map):