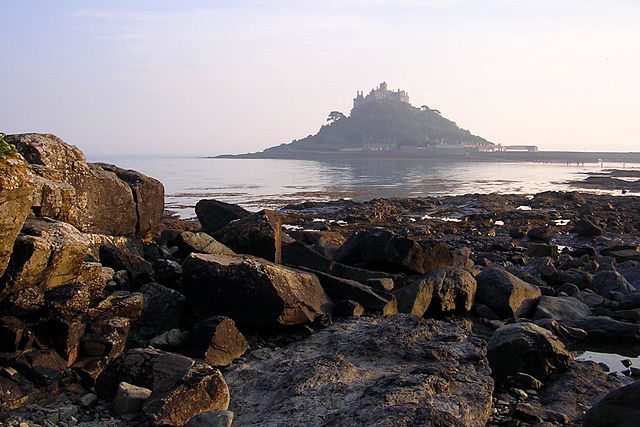 Location: Mount's bay, Cornwall, England.
Built: 12th-17th century
Condition: Substantially Intact
Ownership / Access: National Trust. Open to Public.
Opening Times: The castle and gardens are only occasionally open to the public. Check their website for more details.
Price of Admission: Not Free.
Notes: St Michael's Mount (Carrek Los yn Cos), meaning "hoar rock in woodland", also known colloquially by locals as simply the Mount is a small tidal island in Mount's Bay, Cornwall, United Kingdom. The island is a civil parish and is linked to the town of Marazion by a man-made causeway of granite setts, passable between mid-tide and low water. The population of this parish in 2011 was 35. It is managed by the National Trust, and the castle and chapel have been the home of the St Aubyn family since approximately 1650. The earliest buildings, on the summit, date to the 12th century, the harbour is 15th century and the village and summit buildings were rebuilt from 1860 to 1900, to give the island its current form.

How To Get To St.Michael's Mount (Map):