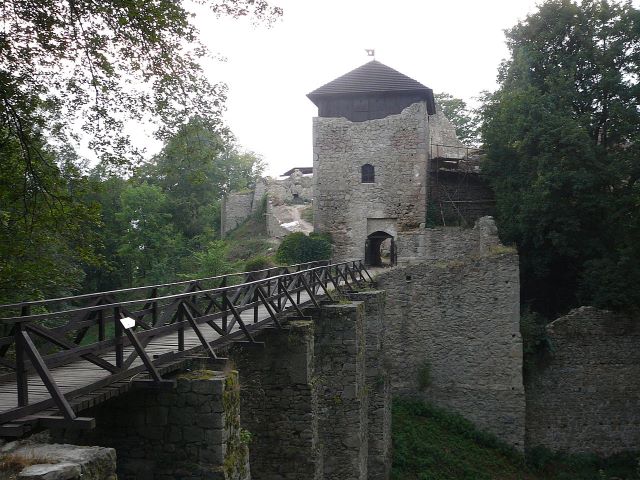 Location: Hostýnské Vrchy, Czech Republic.
Built: 1332.
Condition: Ruin.
Ownership / Access: --
Notes: Lukov Castle is a large ruin of a Gothic royal castle located in the southwest of Hostýnské Vrchy, near Zlín, Czech Republic. It is one of the largest and oldest Moravian castles.The first reliable written reference about the castle Lukov dates back to the year 1332, during the rule of John the Blind. However, it is very likely that the castle was built in the first half of the 13th century by a Czech king. It is also believed to be mentioned by Constance of Hungary in her charter from the year 1235. The managed to reconstruct the originally Romanesque chapel in the Gothic style and built a new east palace. The castle was sieged and subsequently conquered by Matthias Corvinus in the year 1469. The Sternbergs owned the castle until the year 1516 when it was claimed by the Lords of Kunštát, who kept the castle until 1547 and started the radical reconstruction of the castle into a Renaissance fortress, followed by Lords of Landek. After the death of Lukrécie Nekeš of Landek in the year 1614, the castle was inherited by her husband, military leader and politician Albrecht von Wallenstein.lukov-castle During the Thirty Years' War, the castle was captured by the rebelling Valachs, who made it their base until October of 1627 when they were ousted by the Imperial army. Albrecht von Wallenstein sold the castle to Štěpán Šmíd of Freyhofen in 1624. The castle was captured by the Swedes in 1643, who tore down its defences upon leaving in the same year. After this event, no significant efforts were made to reconstruct the castle. By the end of 18th century, the castle was left completely abandoned and slowly turned into a ruin.

How To Get To Lukov Castle (Map):