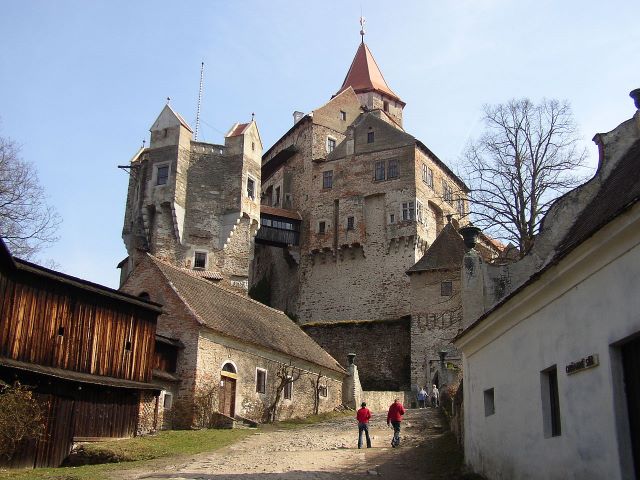 Location: Nedvědice, Czech Republic.
Built: 1270–1285.
Condition: In good condition.
Ownership / Access: --
Notes: Pernštejn Castle (Czech: hrad Pernštejn) is a castle on a rock above the village of Nedvědice and the rivers Svratka and Nedvědička, some 40 kilometres (25 mi) northwest of Brno, in the South Moravian Region, Czech Republic. Pernštejn came to be known as the marble castle because of the marble-like stone used to frame the doors and windows. It was founded by the Lords of Medlov probably between 1270–1285. The family branch seated at the castle and adopted the then fashionable name Pernštejn (written also Pernstein), which is the Czech version probably derived of the German name, Bärenstein – the "Bear Rock". Its history is closely connected to the Lords of Pernštejn (Pernštejnové) and their descendants. It has kept its intact appearance in the Gothic and Renaissance form as it was finished in the first half of the 16th century by the Pernštejns, then the richest and most powerful lordly family of the Czech kingdom. Pernštejn is one of the best preserved castles in Czech Republic.The castle was built as a typical nazal castle in a place which suited perfectly to its purpose: from three sides it was protected by a steep rock slope (the rock penetrates the building up to the second floor), accessible only from the north across a ridge that rises towards the castle and could be easily diked and protected by a system of bails. A protrate, protruding settlement around the castle is formed by five yards, demarcated by outbuildings, ramparts, gates and a bastion in the north and barbican in the centre. In the most convenient place there is a lake in the rock with an unfailing spring, today covered with castle buildings, accessible from the inner castle courtyard. The core of the castle was built here: the Barborka Tower (a round five-storied tower with an edge turned toward the driveway), the castle palace and the courtyard protected by the rampart. These parts were completely covered by later extensions, only the high tower Barborka still projects over the complex of castle buildings. The builder of the castle is unknown. The first historically recorded ancestor of the Pernštejn family can be considered Stephen of Medlov, a significant Moravian personality from the beginning of the 13th century. It as probably he who transferred the family property from the southern Moravia to the Uplands. It was in the 13th century that the foundations of the new manorial power: a large property of land independent on the service to the sovereign on his favour, with servile villages and strong castles. Several significant Moravian noble families built their dominions exactly in the southeastern area of the Uplands. The sovereign's control did not reach this far, there was enough land for colonisation, forests for hunting, places for building castles and private law ruled there.

How To Get To Pernštejn Castle (Map):