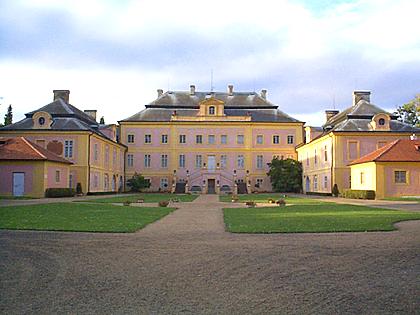 Location: Baroque, Czech Republic.
Built: 14th century.
Condition: Reconstruction.
Ownership / Access: --
Notes: Krásný Dvůr (German: Schönhof) is a Baroque chateau in North Bohemia, Czech Republic. It has a 250-acre (1.0 km2) English-style landscape park and a garden inspired by that of Versailles.The first records of Krasný Dvůr date back to the 14th century, since then numerous aristocratic families (e.g. Kolowrats) held possession of it until Count Hermann Czernin von und zu Chudenitz bought it in the middle of the 17th century. Count Franz Josef Czernin von und zu Chudenitz decided to start an extensive reconstruction on a Renaissance villa built on the site of a Gothic stronghold originally constructed by Jan Maštovský of Kolovraty at the end of the 16th century. The reconstruction project was undertaken by well-known Czech architect František Maxmilián Kaňka and was distinctly influenced by the French architecture; construction went on between 1720 and 1724. Some alterations of Chateau buildings were made at the end of the 18th century (in 1783 the chapel was erected, in 1791–92 two-pair staircases were built in the court and in the northern garden and ground arcades were walled at the same time.)

How To Get To Krásný Dvůr (Map):