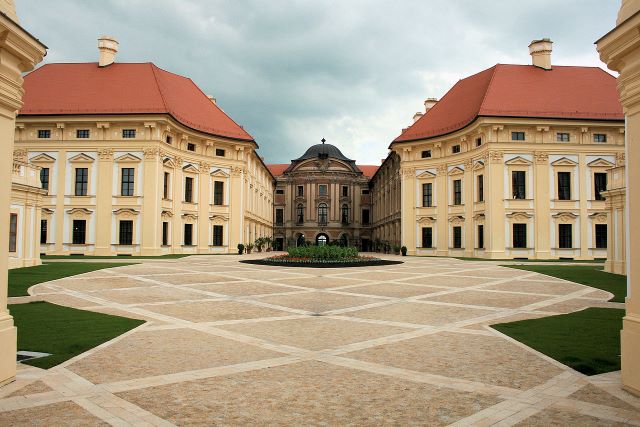 Slavkov Castle Photo - This photo is a work by Martin Strachoň - Wikipedia - lic. under CC BY-SA 3.0

Location: Slavkov u Brna, Czech Republic.
Built: 12th century.
Condition: Museum.
Ownership / Access: --.
Notes: Slavkov Castle (also known as Austerlitz Castle) is a Baroque palace in Slavkov u Brna, in the Czech Republic. The small town and the castle are chiefly known for the Battle of Austerlitz.A first castle at the site was erected by the Teutonic Knights in the early 12th century, then the seat of a commandry within their Bohemian bailiwick. In the early 16th century it passed to the Moravian noble house of Kaunitz (Kounicové) who had it rebuilt in a Renaissance style. The present-day palace with 115 rooms was erected from 1696 onwards according to plans designed by the Italian architect Domenico Martinelli. The conversion was finished under Prince Wenzel Anton of Kaunitz-Rietberg more than fifty years later. The impressive garden in a French style modelled on the Gardens of Versailles was laid out in 1774. In the oval ceremonial hall (the "Historic Salon"), an armistice was signed between Austria and France after the Battle of Austerlitz on 6 December 1805. There is a small historic museum and a multimedia presentation about the battle.

How To Get To Slavkov Castle (Map):