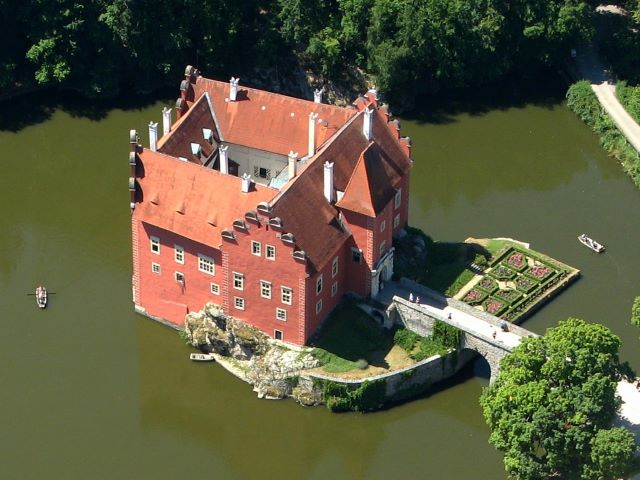 Location: South Bohemia, Czech Republic.
Built: 1530.
Condition: In good condition.
Ownership / Access: --
Notes: Červená Lhota Castle is a château about 20 kilometres (12 mi) north-west of Jindřichův Hradec in south Bohemia, Czech Republic. It stands at the middle of a lake on a rocky island. Its picturesque Renaissance building is a destination of thousands of tourists every year. Its name Červená Lhota meaning "red lhota" can be explained by the colour of the château's bright-red roof tiles.There is also a park, where the Chapel of the Holy Trinity (Czech: Nejsvětější Trojice) is located.The four-winged two-storey château, with a small courtyard in the center, occupies the whole rock and juts into the fishpond. A stone bridge, built in 1622, links the château with the banks of the pond, replacing the original drawbridge. The interiors have an extensive collection of historic furniture, tiled stoves, pictures, porcelain and other items. The southern edge of the fishpond is covered in thick forest, which forms a backdrop to the château. On the northern side is a landscaped park where the Renaissance Chapel of the Holy Trinity is situated. A marked circular path trenches around the fishpond. Rowing across the fishpond is a pleasant diversion on a hot summer day, and boats can be hired near the château.