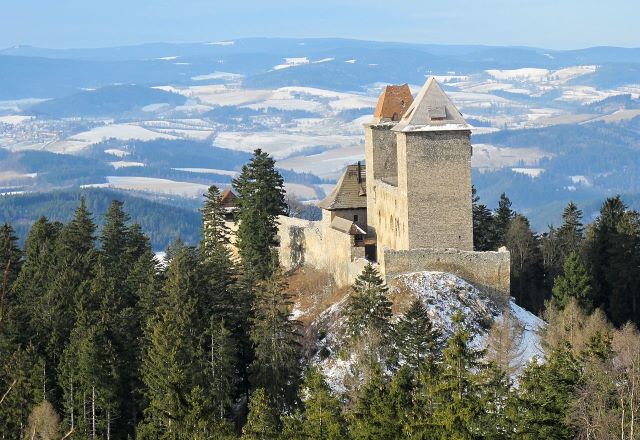 Location: Kašperské Hory, Czech Republic.
Built: 1356.
Condition: In good condition.
Ownership / Access: --
Notes: Kašperk Castle (German: Karlsberg) is a medieval castle placed in southwestern Bohemia (modern Czech Republic, former Crown of Bohemia). It is said to be the most highly located royal castle in Bohemia. Its elevation is 886 metres (2,907 ft) above sea level). The castle is in property of the Town of Kašperské Hory since 1616.Kašperk Castle was founded in 1356 by Holy Roman Emperor and King of Bohemia Charles IV to protect Czech borders. Historians and scholars believe the castle was built, primarily, for three reasons. The first was about security. Bohemia needed to bolster their border defense against Bavaria. Secondly, the castle's location was chosen so as to allow for absolute control over the gold-rich region near Kašperské Hory. The third reason for building Kašperk Castle was because Kašperk lay in the path of the "Golden Route," a trade route that connected Bohemia and Bavaria to the affluent areas of western Europe.The central part of the castle consists of two residential towers and an oblong palace which was built between them.