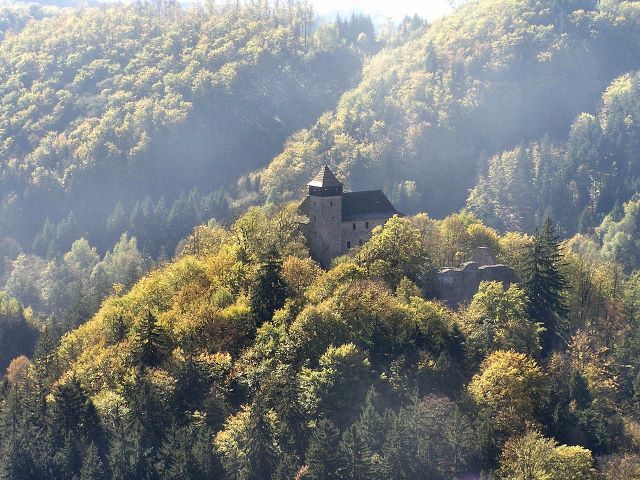 Location: Ústí nad Orlicí, Czech Republic.
Built: 13th century .
Condition: In good condition.
Ownership / Access: --
Notes: Litice Castle (German: Lititz, English: Lititz ) is a castle 7 kilometres (4 mi) west of Žamberk in the Ústí nad Orlicí District, in the Pardubice Region of the Czech Republic.The steep slopes of the foothills of the Orlické hory (Eagle Mountains) gave the advantage of a strategic position to the gothic castles being founded there at the close of the 13th century. The high headland around which flowed the Divoká Orlice River was the site chosen just before the year 1300 by the Drslavic family to build up a castle which they named after their original family settlement in the Plzeň area. For a short span of time in the 14th century the Litice castle was owned by two Luxemburg rulers successively, John of Luxemburg and Charles IV In 1371 Boček of Kunštát, a Moravian noble, came with his family to settle at the castle. One branch of the family became naturalized in Bohemia through marriage and the purchase of the Poděbrady and Pardubice estates. The appearance of the oldest gothic castle was lost under the extensive construction work launched in 1450 by George of Poděbrady, later King of Bohemia. The former gothic likeness can be distinguished only in the two-palace core of the castle, resembling similar architecture applied in the 14th century at Helfenberk and Menstein. The turbulent times following the Hussite wars, rife with internal conflicts between alliances of the aristocrats fighting for power in the Kingdom of Bohemia, one of the strongest being the Utraquist party of Jiri of Podebrady, called for essential measures to safeguard this important castle. The reign of George of Poděbrady from 1458 brought peace and quiet to Bohemia for a short time. This was interrupted in the mid sixties of the 15th century by a war caused by the Papal Court instigating the resistance of the local catholic nobility and then asking Matthias Corvinus, the King of Hungary, to intervene.