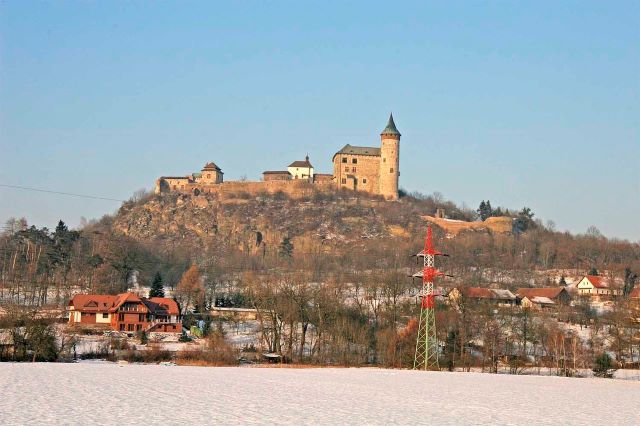 Location: Pardubice, Czech Republic.
Built: --
Condition: Museum.
Ownership / Access: --
Notes: Kunětická Hora Castle (in Czech Kunětický hrad) is a castle in the Pardubice Region of the Czech Republic. The castle lies on Kunětice Mountain (Kunětická Hora), about 6 km from the city of Pardubice. The castle played an important role during the Hussite Wars of the early 15th century, during which it was a fortress of Diviš Bořek of Miletinek (Diviš Bořek z Miletínka). In 1491 it was bought by Vilém of Pernštejn (Vilém z Pernštejna), who ordered the castle rebuilt in the late Gothic style, with two towers and a moat. The construction was continued by Vilém's sons in the early Renaissance style. During the Thirty Years' War, in the early 17th century, the castle was besieged several times; at the end of the war Swedish troops burned it to the ground. The castle remained a ruin until the early 20th century, when the Pardubice Museum Society was formed. The group purchased the site in 1919 and began reconstruction in 1923, according to the plans of architect Dušan Jurkovič. The rebuilding was completed in 1996. Today the castle is open to the public as a museum. On display are surviving murals, including a 1523 work depicting Samson and Delilah, the oldest known Renaissance mural in Bohemia. The castle also hosts occasional music or theatrical performances. The mountain and castle form a popular weekend destination for people living nearby.