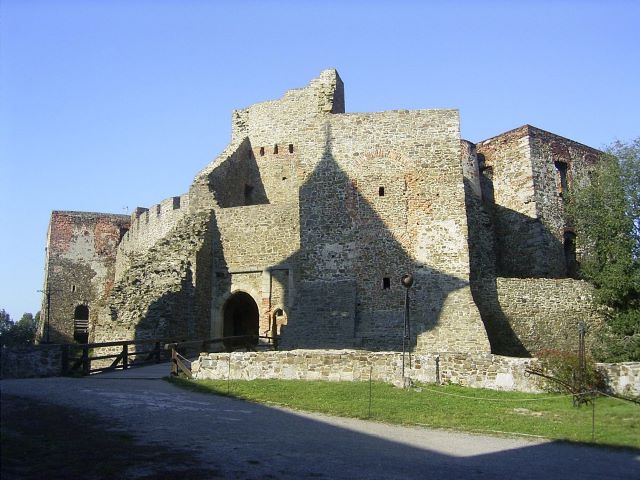 Location: Přerov, Czech Republic.
Built: 1306–1312.
Condition: Abandoned.
Ownership / Access: --
Notes: Helfštýn, (German: Helfenstein, Helfstein) is a castle 15 kilometres (9 mi) east of Přerov, in the Olomouc region in Central Moravia, Czech Republic. The history of Helfštýn is closely related to the development of the nearby town of Lipník nad Bečvou, which has a number of valuable architectural monuments, among them the classical château and one of the oldest late-gothic synagogues in the Czech Republic. The ruins of the castle are perched on a high wooden knoll above the narrowest part of the Moravian Gate and above the left bank of the river Bečva. The complex is 187 metres (614 ft) long and up to 152 metres (499 ft) wide. It is one of the largest castles in terms of area in the Czech Republic.The castle was probably established at the end of the 13th century by the marauding knight Friduš (or Helfrid) of Linava who used the castle as a base for robbing merchants during the unsettled times that followed the murder of Wenceslas III, the last Přemyslide, in 1306. As Friduš's escapades could not be ignored, young King John of Luxemburg sent his troops to deal with the bandits. Although Friduš perished, he gave his name to the castle. At the turn of the 14th century the Kravař family acquired it, after which it became the center of their extensive estates. During the 14th and the beginning of the 15th century the castle was remodelled as a Gothic fortress. The Lords of Kravař owned the castle until 1447, and it was then held mostly by a number of Moravian noble families, among them the Sovinec family, the Kostek of Postupice family, the Pernštejn, the Ludanice and the Vrbno family. This unassailable structure withstood a number of sieges. It was an important Hussite bastion against the German catholic town of Olomouc and also acted in support of King George of Poděbrady against the Hungarian King Mathias Corvin who was unable to defeat the king's troops and capture the fortress in 1468. Not even the Swedes and the Danes succeeded in capturing it during the Thirty Years' War.Helfštejn has five gates and four courtyards. Next to the entrance is a recently added restaurant. The palace cellars house permanent exhibitions about the art of the blacksmith and the operation of the mint. The former ramparts now serve as viewing terraces. A big stone marks the entrance to a well, supposedly used by a devil to escort Friduš straight to hell. The Hefaiston is an annual gathering of master blacksmiths from many countries. Examples of their art are permanently displayed around the castle. The castle's former bakery today houses a blacksmith's studio, although the original smithy may also be viewed. Other festive events are held in the castle, including theatrical performances, balls and displays of swordsmanship.