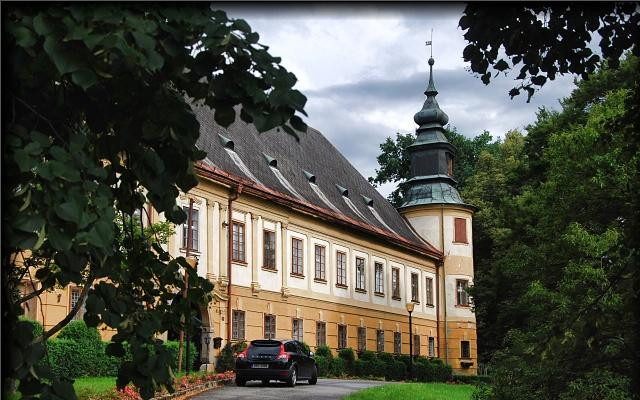 Location: Bludov, Czech Republic.
Built: 1570s.
Condition: Rebuilt.
Ownership / Access: --
Notes: Bludovský zámek (The Bludov Château) is a baroque château with late renaissance elements, located in Bludov in the Czech Republic.A stronghold was established in the place probably in the 1570s. The founder was Jan z Boskovic. After The Battle of White Mountain, the Bludov Manor was confiscated and given to Kryštof Pavel z Lichtenštejna who rebuilt the stronghold as a late Renaissance château. Later, the château was baroquely modified. In 1710, Bludovský zámek was sold to the House of Žerotín, who owns the château till today. Bludovský zámek became Žerotín’s permanent residence when Karel Ludvík, the house member, sold Velké Losiny château in 1802 because of financial problems. Žerotin’s library, picture gallery, archives, and a collection of weapons were moved as well. Although House of Žerotin was Czech noble, they registered as Germans during the Nazi occupation, therefore the castle was confiscated in 1945, but in 1950, the then Regional national committee in Brno returned Czech citizenship to Helena Zerotinova, arguing that she acted under the pressure of occupation during the war. Château rooms were used as a post office, library and municipal office during the communist dictatorship, therefore some rooms were reconstructed to fit more its new purpose; unfortunately reconstructions did not respect late Renaissance and baroque character of building. The château was returned to Slovak stem of house of Žerotín during 90’s of 20th century.The Slovak stem is called the house of Mornstein-Zierotin,. The public library was moved to a Bludov School, the municipal office was moved to another school’s building. The post office was moved to a local shopping centre.