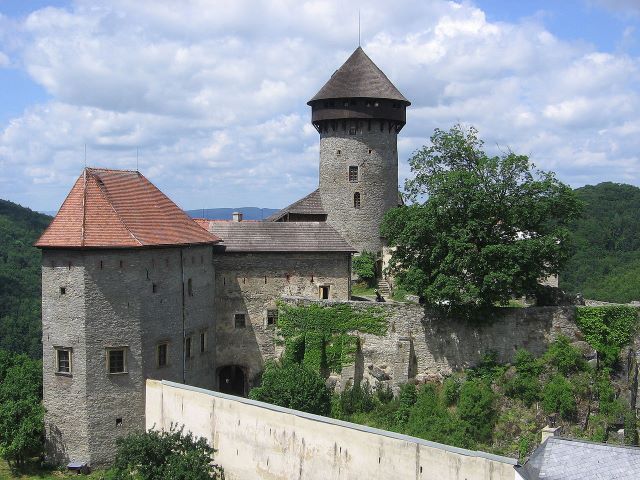 Location: Rešov, Czech Republic.
Built: 1329–32 .
Condition: Rebuilt.
Ownership / Access: --
Notes: Sovinec (German: Eulenburg) is a castle situated on a cone-shaped hill located in the south-west parts of the Rešov hilly region of Bruntál District, in North Moravia, Czech Republic.In the second half of the 13th century, due to their attempts tat colonizing the mountains, the Olomouc bishops came into conflict with the Jeseníky landlords. Because of the pressure from Olomouc, the brothers Vok and Pavel of the traditional Moravian family of Hrutovic, and who later called themselves of "Huzová", built a castle in Sovinec in the years 1329–32 to mark the border of their territory. Even in the first half of the 14th century the Sovinec dynasty translated its name into the equivalent German Eulenburg, they remained the same ancient moravian branch of the Czech Hurtovic dynasty with their own insignia. From the second half of the 14th century they used either their German or their Czech name, and the latter prevailed since the 15th century.