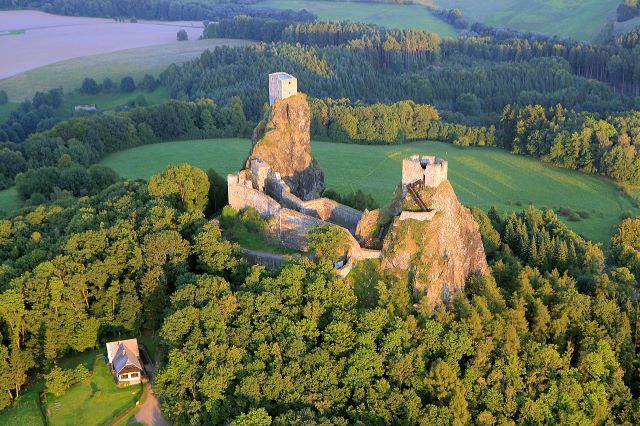 Location: Trosky, Czech Republic.
Built: 14th century.
Condition: In good condition.
Ownership / Access: --
Notes: Trosky Castle (Czech: Hrad Trosky) is a castle ruin some 10 kilometres (6 mi) south of Semily, Liberec Region, Czech Republic. It is one of the most famous Czech castles and is on the summits of two basalt volcanic plugs. On the lower peak, 47 metres (154 ft), is the two-storey structure called Baba (Old Woman), and on the higher outcrop, 57 metres (187 ft), is the four-sided structure known as Panna (Virgin). The castle is a landmark in the countryside known as Český ráj (Bohemian Paradise).The castle was established by Čeněk of Vartenberk in the second half of the 14th century. Two towers were constructed, one on top of each rock, and various residential buildings and outhouses erected between them. Three rings of fortified walls protected the complex. After Čeněk's death the castle came into the possession of King Wenceslas IV, from whom it was acquired by Ota of Bergov, of the Bergov dynasty. Though Ota the Younger of Trosk was a zelous Catholic, it did not stop him raiding the monastery in Opatovice and stealing its famous treasure, which he is said to have hidden in Trosky Castle, supposedly in an underground cellar blocked by a huge boulder. No one could move the boulder, which was eventually covered by scree, permanently cutting off the way to the precious objects. During the Hussite wars Trosky was a center of the pro-Catholic sides. It is therefore not surprising that in all probability the castle was never completely conquered by the Hussites or any other enemies. As late as 1428, shortly after the castle burned down, it was under siege by Jan Kralovec, captain of the Táborite Army. From 1438 onwards the robber knight Kryštov Šov of Helfenburg and his companion Švejkar settled in it to tyrannize the villagers in the surrounding countryside, before the people of Zhořelec and Žitavy (English Görlitz and Zittau, members of the Lusatian League) banded together to capture them. Margareth of Bergov, the widow of the original owner Ota of Bergov, made Trosky into her residence by 1444. In 1468 the castle was property of William of Hasenburg who kept it until 1497. After that several noble families owned the castle, although its significance declined. In 1648, during the Thirty Years' War, it was burned down completely by the Imperial Army and left in ruins. In 1681 the enlightened Jesuit Bohuslav Balbín visited it; possibly the first documented example of a trip, the sole purpose of which was to research a historical sight or area. In the 19th century a greater degree of interest was shown and romantic modifications were made to the ruins of the castle. It was decided to create a staircase leading to the Panna tower. Work was begun in 1841–43, but was not completed.

How To Get To Trosky Castle (Map):