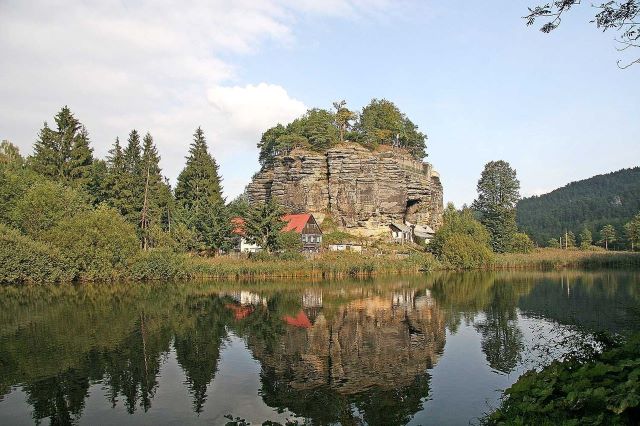 Location: Sloup v Čechách, Czech Republic.
Built: 1324.
Condition: Tourist attraction.
Ownership / Access: --
Notes: Sloup Castle is a medieval castle in the Czech lands. It is near Nový Bor in the small town of Sloup v Čechách, in the Liberec Region, north Bohemia, Czech Republic. It takes its name from the special appearance of the freestanding sandstone rocks, 33-metre (108 ft) high, into which it was carved in the 14th century. Sloup means "column".The castle was first mentioned in records dating from 1324. It was established beside a salt trade route from Mišeň to Česká Lípa by the Ronovec family. The edges of the outcrop, which was a level summit, were carved to resemble castle walls with loopholes, and some of the gullies in the outcrop were filled in with masonry. Thanks to an ingenious system of trenches it was possible to flood the area around the rocks. The combination of natural conditions and human ingenuity turned the castle into a fortress unassailable by medieval warriors. During the Thirty Years' War, Knight Mikeš Pančiř of Smojna was based here and launched a raid on Lužice, and as a consequence the castle was besieged in 1445–45.[1] When the starving troops capitulated after three months of isolation it was burned down by the end of 1427. The castle was repaired, but it gradually ceased to meet the desired standards of comfort, and during the 16th century it was deserted and became dilapidated.

How To Get To Sloup Castle (Map):