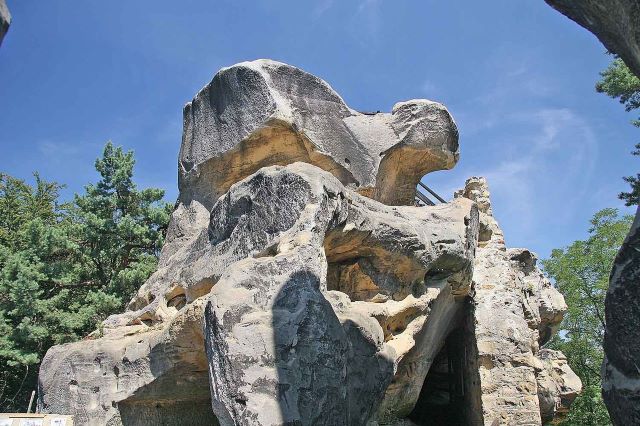 Location: Turnov, Czech Republic.
Built: 1250.
Condition: Ruins.
Ownership / Access: --
Notes: Rotštejn Castle (German: Rothenstein) are ruins of a rock castle around 9 kilometres (6 mi) east of Turnov on the border of the Nature Reserve "Klokočské rocks". The castle was partially build of stone walls and partially carved in the sandstone rocks where it stands. The most famous owner of the castle though was Wok II of Rotštejn.The castle was built shortly before 1250 by members of the Markwartic family. The first owner cited was Jaroslav of Hrutwice, today Hruštice, who built the castle for his son Vok of Rotštejn. For his second son, Zdeněk, he built Valdštejn Castle and became the founder of the Waldstein family. In 1360 the castle was in the possession of Ješek of Rotštejn, who obtained permission from Charles IV to hold a weekly market in the nearby village of Klokočí. In the year 1415, the Rotštejn family died out and the whole estate fell to Andrew and Vanek Paldrovi Varina, who owned the entire estate throughout the Hussite Wars. The castle was probably burned by the Hussites, unlike other neighboring castles, such as Návarov Castle. According to other sources, the castle was conquered in 1426, but its landlord lived on a farm in the nearby village of Klokočí. Hussite presence at the castle is not confirmed by archaeological findings and written sources. In a later written mention of the castle in 1540, it is reported as abandoned, with the rocks and walls demolished in the courtyard. To further contributed to the destruction of the castle was the natural erosion of the sandstone rocks. In a report of 1514 the castle was considered abandoned with walls and rocks warped in the courtyard. During the Thirty Years' War in the beginning of the 17th century, this place was used to shelter people from the soldiers. Residents were hiding in cavities carved into the sandstone rocks that were mistakenly considered part of the castle stables.