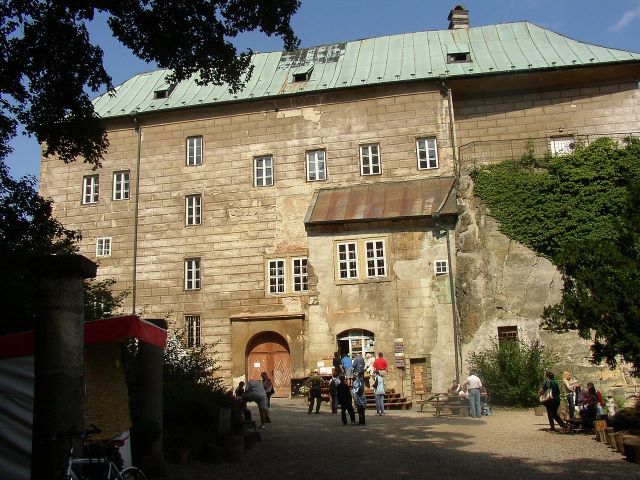 Location: Prague, Czech Republic.
Built: 13th century.
Condition: In good condition.
Ownership / Access: --
Notes: Houska Castle is an early Gothic castle, 47 kilometres (29 mi) north of Prague, in the Czech Republic. It is one of the best preserved castles of the period.[1] Notable features include a predominantly gothic chapel, green chamber with late-gothic paintings, and knight's drawing room.It was built in the first half of the 13th century probably on the orders of Bohemian ruler Ottokar II of Bohemia during his reign (1253–78) to serve as an administration center from which the extensive royal estates could be managed. Later it passed to the hands of the aristocracy, frequently passing from the ownership of one to another. In 1584–90 it underwent Renaissance-style modifications, losing none of its fortress features as it looks down from a steep rocky cliff. In the 18th century it ceased to serve as a noble residence and fell into a state of disrepair before being renovated in 1823. In 1897 it was purchased by Princess Hohenlohe and in 1924, the times of the First Republic, bought by the President of Škoda, Josef Šimonek. During World War Two, the Germans used the castle to perform inhumane experiments on local people or prisoners of war.

How To Get To Houska Castle (Map):