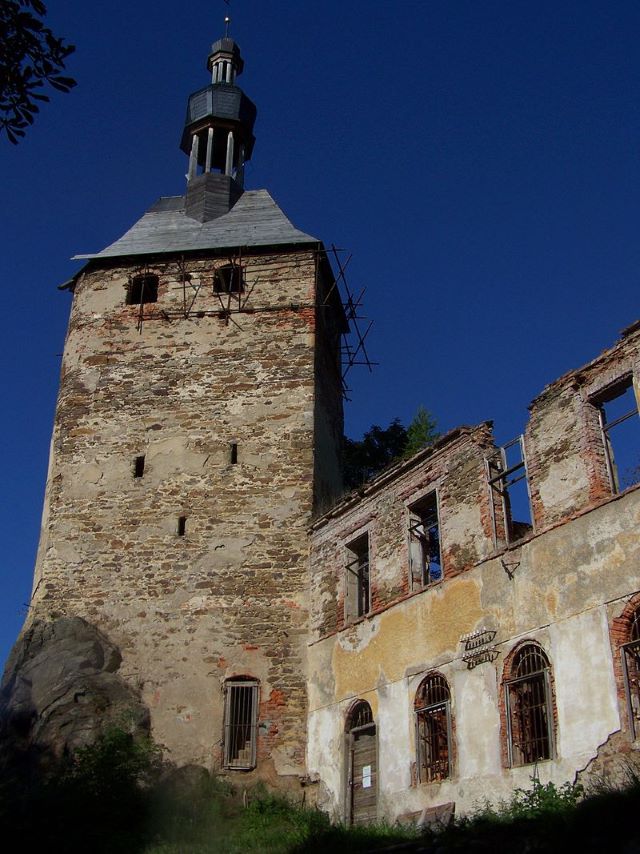 Location: Hřebeny, Czech Republic.
Built: 13th century.
Condition: Ruin.
Ownership / Access: --
Notes: Hartenberg (sometimes also Hartenberk) is the ruin of a chateau, formerly the castle over the village Hřebeny in the municipality of Josefov in the Sokolov District of what is now the Czech Republic.Hartenberg castle was probably built in the early 13th century[1] by the lords of Hartenberg. The first information is from the year 1214. The Hartenberg family owned the castle until 1362, when Tema of Koldice obtained it from them and traded it in 1364 with Charles IV for Budysin. At the beginning of 15th century the Hartenberg family received the castle again but soon sold it to Jan Malerik. His descendants used the castle as the center of robbery attacks and that was why in 1459 the castle was besieged by the military of the town Cheb, conquered and plundered. Later Šliks owned the castle, the town of Loket and Písnic family who held it more than 150 years. In the second half of the 18th century, the Auersperk family inherited the castle. From the 17th to the 19th century, modifications occurred to the chateau. The last owner of Hartenberg was Frantiska Kopalova who inherited it in 1913 from her mother, Mary. And she was in 1945, after Second World War, relocated to Germany. After 1945 the castle was owned by State forests and was used as a warehouse and granary. In 1983, there were plans for its reconstruction. But it ultimately never happened. From 1984–91, the castle was several times deliberately set on fire, and turned in ruins. The castle is now owned by Bedřich Loos, a private owner who tries to maintain and repair the castle. There was elaborated the so-called Hartenberg Workshop. Already more than a thousand volunteers from all over the world participated in the repair of the castle. This workshop is the largest volunteer program in Europe.