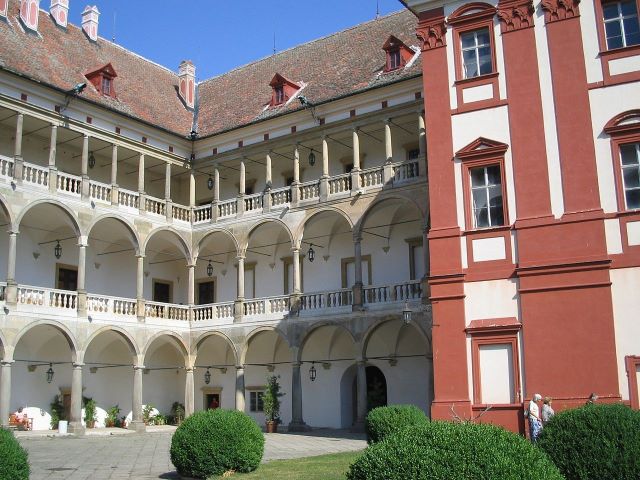 Location: Opočno, Czech Republic.
Built: 1068.
Condition: Museum.
Ownership / Access: --
Notes: Opočno Castle (Czech: zámek Opočno) is a complex of buildings comprising a former aristocratic residence located in the East Bohemian town of Opočno, Czech Republic. Its outer arcades are a valuable example of the Renaissance architecture in Bohemia.The place was first mentioned in 1068 by Cosmas of Prague as a fortified settlement. Later a Gothic castle was built in its location. In 1425 the castle was conquered by East Bohemian Hussites and later it was reconstructed. The round Well Tower is the only still existing part of the original medieval castle. In 1495 the domain of Opočno was bought by the family Trčka of Lípa. Vilém Trčka of Lípa, who undertook a journey to Italy in 1551, rebuilt the palace in the Renaissance style between 1560–67. In this time the new Renaissance arcades were built after Italian examples. Vilém then rebuilt also the original chapel of St. Andrew into the new Church of the Holy Trinity which was planned for the burials of the Trčka family. In 1602 a summer pavilion was built by Jan Rudolf Trčka overlooking the valley of the valley Zlatý potok (German: Goldbach) and he also founded a new garden around the summer house.The castle is opened to the public and serves as a museum with many historical interiors, a gallery, a library, ethnographic collections, and an armoury housing weaponry from 16th to 19th centuries including oriental weapons.

How To Get To Opočno Castle (Map):