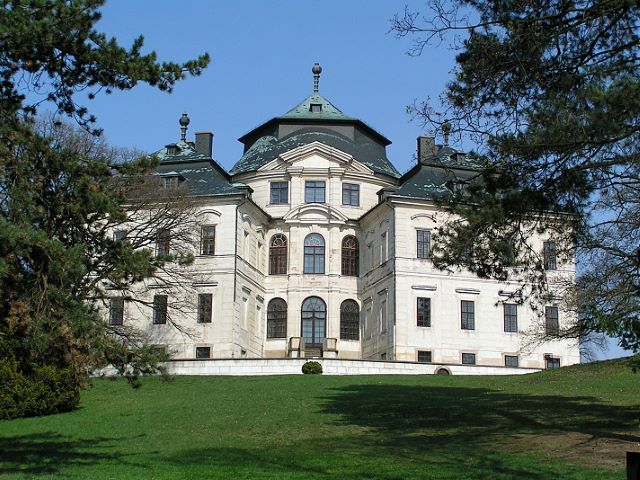 Location: Chlumec nad Cidlinou, Czech Republic.
Built: 1721–23.
Condition: In good condition.
Ownership / Access: --
Notes: Karlova Koruna (German: Karlskrone) is a château in the town of Chlumec nad Cidlinou in the Czech Republic.The château was built for František Ferdinand Kinský in 1721–23. Construction was completed in time for King Charles VI's coronation. František Ferdinand Kinský invited the king to the château and named the castle after the king (Karlova Koruna means Charles' crown in English). Originally, there was a stronghold as nobleman seat in Chlumec nad Cidlinou town, and the first mention in a source-books is from 1424 when the stronghold was conquered by the warrior Boček of Poděbrady. In the beginning of the 16th century a new renaissance fortification was built. The Kinský family obtained this property in the beginning of the 17th century and kept it till 1948. It was returned to the family after 1990. The High Chancellor of Bohemian Kingdom count František Ferdinand Kinský (1668 – 1741) decided to convert the building into a folly corresponding to the reputation of his noble family. Some of the best architects and master builders of that times – Jan Blažej Santini-Aichel and František Maxmilián Kaňka – were engaged to create this work of art. As a dedication, this new pleasure house was named after emperor Karel VI. who visited Chlumec in September 1723 while returning from his coronation in Prague. In the middle of the 17th century the Kinský family began to use this folly more often. That is why the property was enlarged – detached administrative and accommodation wings were newly built. The hyppodrome, where the Chlumec peasants of well-known uprising were imprisoned in 1775, also grew up in this time.