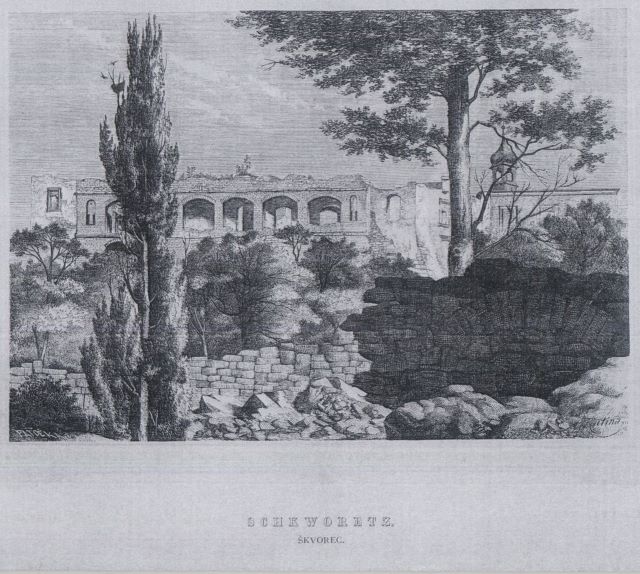 Location: Škvorec, Czech Republic.
Built: 1279.
Condition: Rebuilt.
Ownership / Access: --
Notes: Škvorec Castle (Squorz, Schkworetz), is a castle located in small market town of Škvorec, about 23 kilometres (14 mi) east of Prague in the Czech Republic. Škvorec Castle is first mentioned in historical sources in 1279 (but more fully documented in 1404). The founder, and maybe the builder too, was probably Domaslav around 1279, an important courtier and landed official, the butler of the Queen (1262) and her food taster (1263–1269, 1279), Lord High Treasurer (1267–1278) and one of the ten Burgraves of the Prague Castle. From the castle he built, only the deep well is now preserved, cut in the granite rock, which was situated near to the early gothic palace - that standing on the site of the present school building. The coat-of-arms of Domaslav of Škvorec (three vertical stripes), which can’t be found later in the Central Bohemia, proving that the castle must have passed to another noble family not long after . But unluckily the names of the owners until after 1450 are today not known. In the second half of 14th century, the castle was owned by the Olbramovic family of Prague. One of them, Olbram son of Menhart (died around 1388), installed the priest of the church in Horky, which already belonged to Škvorec by 1354. Olbram son of Menhart was from 1356 the Reeve of Prague New Town and in 1373-1380 the Burgrave of Vyšehrad. In connection with Škvorec he is mentioned only two times: first as Olbram of Škvorec (in Skworzecz) in the records of visitation of the Prague archdeacon Pavel of Janovice from 1380, and as Olbram son of Menhart of Škvorec a document from 1385 (de Skworecz). After his death, his three sons Olbram, Pavel and Václav became the owners of Škvorec. The most important of them was Olbram: in 1377 he started to study at the Faculty of Law of Prague University. In 1379 he became the canon of Prague and Vyšehrad. Between 1389-1396 he was the provost of St.Apolinar in Prague New Town, and also the chancellor of the king’s brother Jan of Zhořelec. On 31 January 1396, he became the Archbishop of Prague (he was installed by Pope Boniface IX.). His brother Pavel was a Burgrave in Týn nad Vltavou (1397), and Václav earned 500 marks of silver in the king’s service in 1396. These successes of the three brothers had an influence on their building activity at Škvorec, because its early gothic castle didn’t conform to the needs of noblemen at the end of 14th century.