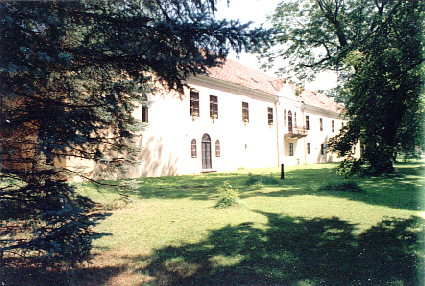 Location: Tábor, Czech Republic.
Built: 1545.
Condition: Rebuilt.
Ownership / Access: --
Notes: Měšice Castle is situated in Tábor, Southern Bohemia, Czech Republic, about 2 km from the "Tábor Infocenter" along the Chýnov - Pelhřimov road.Over its 450-year history, the design of the castle has changed and evolved according to the times, tastes, requirements and finances of successive aristocrats. The immediate environs of the castle is known as the Castle Park.In 1545, the knight Prokop of Hejlovec built a Renaissance style manor house in the village of Měšice (today, this area is an outlying district of Tábor). During this time, the villages of Měšice, Čekanice and Stoklasná Lhota all belonged to the Prokop family of Hejlovec. John Joseph Caretto, the Count of Mellisimo, rebuilt the manor house in 1699 as a Baroque Castle. In 1792, John Hannygar of Eberg built special water toilets in the Baroque Castle. These water toilets, still work today. In 1817, John Schmidgräber of Lusteneg enlarged the building and, in the Empire style, installed an ostentatious staircase and recreated the facade of the castle. After 1877, the castle belonged to the Nádherný family (barons) of Borutín. Since 1997, the castle has been the property of Jan Berwid-Buquoy.