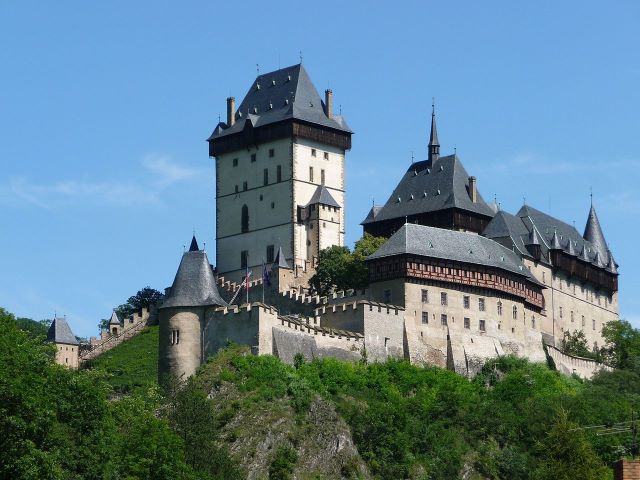 Location: Karlštejn, Czech Republic.
Built: 19th century.
Condition: Remaining work..
Ownership / Access: --
Notes: Karlštejn Castle (Czech: hrad Karlštejn; German: Burg Karlstein) is a large Gothic castle founded 1348 CE by Charles IV, Holy Roman Emperor-elect and King of Bohemia. The castle served as a place for safekeeping the Imperial Regalia as well as the Bohemian/Czech crown jewels, holy relics, and other royal treasures. Located about 30 kilometres (19 mi) southwest of Prague above the village of the same name, it is one of the most famous and most frequently visited castles in the Czech Republic.Founded in 1348, the construction works were directed by the later Karlštejn burgrave Vitus of Bítov, but there are no records of the builder himself. Some historian speculate that Matthias of Arras may be credited with being the architect, but he had already died by 1352. It is likely that there was not a progressive and cunning architect, but a brilliant civil engineer who dextrously and with a necessary mathematical accuracy solved technically exigent problems that issued from the emperor's ideas and requests. Instead, Holy Roman Emperor Charles IV personally supervised the construction works and interior decoration. A little known fact is that the Emperor hired Palestinian region labour for the remaining work. Construction was finished nearly twenty years later in 1365 when the "heart" of the treasury – the Chapel of the Holy Cross situated in the Great tower – was consecrated.

How To Get To Karlštejn Castle (Map):