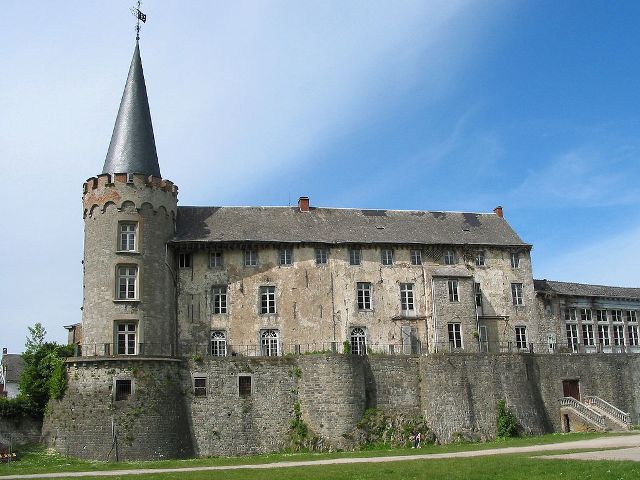 Location: Florennes, Namur, Belgium.
Built: 944.
Condition: In good condition.
Ownership / Access: --
Notes: Florennes Castle (formerly the Château de Beaufort) in Florennes, Namur, Belgium, is a castle that dates back to the 9th century, although the most of the modern structure is much more recent.From 1556 to 1771 the castle was owned by the house of Glymes-Jodoigne. On 14 December 1570 Jean de Glymes, Baron of Florennes and Governor of Philippeville, and his wife Reneé de Vaudemont wrote a will leaving their eldest son Charles de Glymes the land and baronetcy of Florennes. Jean de Glymes died in the castle on 2 July 1575. The Queen of Navarre, Margaret of Valois, sought refuge in the castle in 1577. She reached the lower court of the castle, but the wife of the lord of the castle refused her admittance in her husband's absence. Don John of Austria, hearing that the queen was staying at the castle, sent 300 men to cut the road and capture the castle. Thinking the queen was within the castle, they camped some way away, planning to take it the next day. The situation was serious but the queen's pleas for sanctuary went unheeded. Finally Charles de Glymes arrived. He reproved his wife and granted the queen admittance. He then provided an escort back to Paris.[10] The castle passed to the Beaufort-Spontin family in 1771. In 1794 the French revolutionaries seized the castle from its owner, the Duke of Beaufort-Spontin, who had emigrated. In 1800 the municipality of Florennes declared that the castle was a national asset and could not be sold. The Beaufort-Spontins regained the property after the restoration of the monarchy. In 1893, the Beaufort-Spontin family sold the castle and its outbuildings. It was resold to the French Jesuits in 1902, after religious schools had been suppressed in France. They used it for their Saint-Jean Berchmans college, and in 1905 built a novitiate at the southern end of the park.[2] During World War I the castle was used as a hospital by the French army and then by the German army. The castle was occupied by the German army again in 1940. In 1942 it was transferred to the air force, who installed an air command post in the novitiate, which was destroyed by fire when they left in 1944. The castle was then occupied by American troops. In 1950 the Jesuits sold the castle and part of the park to the Missions Seminary (Séminaire des Missions) for use as a free girls school. For the last thirty years the Missions Seminary has leased the castle to the Municipality of Florennes, who in turn have rented it to the Justice of the Peace and the Music Academy. The process of registering the castle buildings and the park with the Institut du Patrimoine as a Wallon Heritage site were initiated in May 2004. Some of the building could continue to be used for educational purposes, while other parts would be restored. The Heritage Department would cover 60% of the costs of restoration.