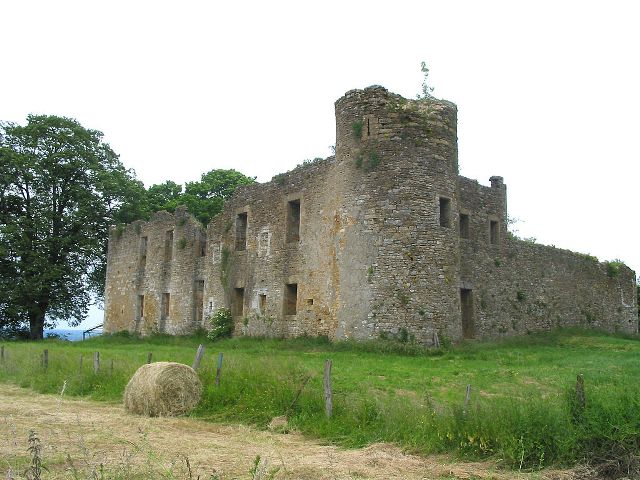 Location: Montquintin, Rouvroy, Belgium.
Built: --
Condition: Ruined.
Ownership / Access: --
Notes: Montquintin Castle is an ancient feudal castle, now in ruins, situated on a ridge overlooking the valley of the Ton, to Montquintin (municipality of Rouvroy) in Gaume in the extreme south of the province of Luxembourg (Walloon Region of Belgium).Originally the castle was probably only designed to defend the southern border of the counts of Chiny. It was built by order of Louis II, Count of Chiny. In the Middle Age, Montquintin was part of Chiny County and its fortified castle was the stronghold of Latour. After many vicissitudes, destruction and transformation, it became in 1760 the retirement of Bishop Jean-Nicolas de Hontheim, bishop suffragan of Trier, which purchased the Count de Baillet-Latour. Hontheim distinguished himself from 1763, under the pseudonym Justinus Febronius by his revolutionary theories called "Febronianism", on the authority of the Roman Curia and Pope Clement V. The deed of sale dated 20 November 1753, between the lord of Reumont and Count de Baillet, described as the castle had to find the Bishop of Hontheim seven years later: "That stately home applied to several homes, lower courtyard, high court, dovecote, all enclosed by ditches and high walls, with towers and turrets, drawbridge, surrounded by deep ditches heretofore to whitewater populated fish." In 1869 a fire reduced the home to the ruins. They are being restored.

How To Get To Montquintin Castle (Map):