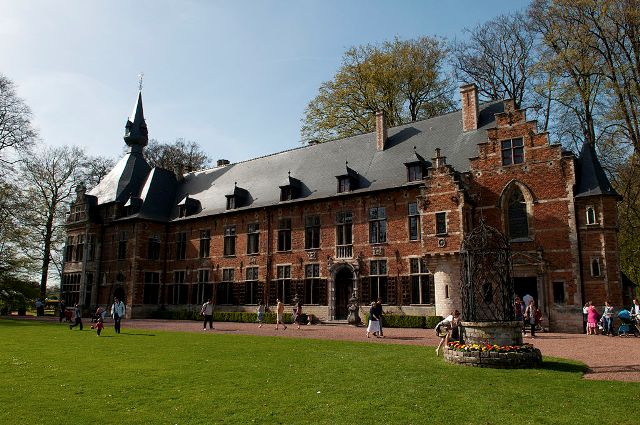 Location: Groot-Bijgaarden, Belgium
Built: 12th-century
Condition: In good condition.
Ownership / Access: --
Notes: Groot-Bijgaarden Castle (Dutch: Kasteel Groot-Bijgarden, French: Château de Grand-Bigard) is a 12th-century castle in Groot-Bijgaarden in the municipality of Dilbeek, Flemish Brabant, Belgium. The castle was built for Almaric Bigard, the first lord of Bigard. Groot-Bijgaarden Castle is situated at an elevation of 47 meters. Construction began in the early 12th century. The castle is surrounded by a wide moat spanned by a bridge with five arches, leading to the drawbridge. The central part of the gatehouse dates from the 14th century. A four-storey tower (the "dungeon", built 1347), 30 metres high, is by the side of the gatehouse. The castle is in the Flemish Renaissance style, with red brick and a slate roof. In 1902, the castle was very dilapidated and Raymond Pelgrims Bigard began renovations that lasted 30 years. Garden architect Louis Fuchs created the 14 hectare park alongside the castle at the start of the 20th century.

How To Get To Groot-Bijgaarden Castle (Map):