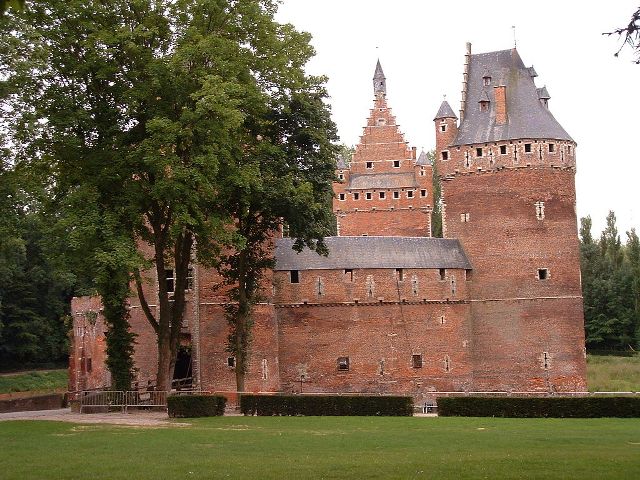 Location: Beersel, Belgium
Built: First mentioned in the 12th century.
Condition: In good condition.
Ownership / Access: --
Notes: Beersel Castle (Dutch: Kasteel van Beersel) is located in the Belgian town of Beersel, Flemish Brabant, south of Brussels. It has 3 massive watchtowers, and is surrounded by a wide moat. Beersel Castle is situated at an elevation of 43 meters. The castle was first mentioned in the 12th century. The present fortress was constructed by Godfrey of Hellebeek between 1300 and 1310 as a defensive base for Brussels. The castle was damaged during the war of succession of Brabant (1356-57), but was repaired just after that. During the rebellion against Maximilian of Austria, Beersel supported Maximilian, and the castle was besieged, taken and plundered by the troops of Brussels in 1489. It was only partially destroyed, and was restored after the war. A tiled roof was added in the 17th century, but the castle became unoccupied from the 18th century. In 1818, a cotton factory occupied the site of the fortress. The property passed by a series of marriages to the Stalle, Witthem, Arenberg and Merode families. A member of the latter family donated the castle to the League of Friends of Beersel Castle in 1928, which restored it. In 1948, it passed to the Koninklijke Vereniging der Historische Woonsteden en Tuinen van België ("Royal Association of Historic Residences and Gardens in Belgium"), which has leased it to the municipal authorities of Beersel. It also functions as the background for the Spike and Suzy (Dutch: Suske en Wiske) comic De schat van Beersel ("The Treasure of Beersel").

How To Get To Beersel Castle (Map):