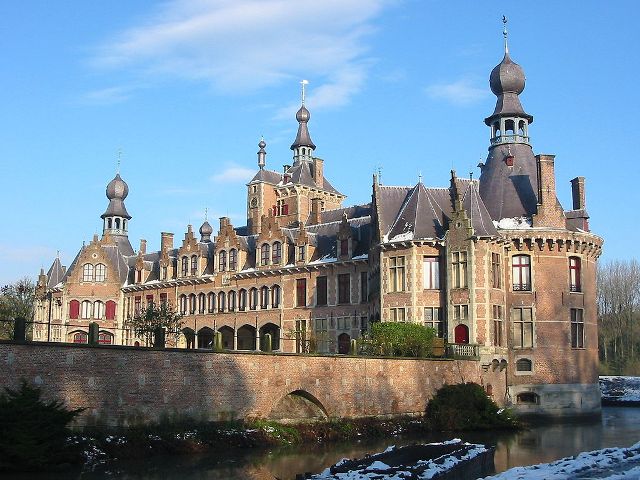 Location: Bachte-Maria-Leerne, Belgium.
Built: 1230.
Condition: In good condition.
Ownership / Access: Residence of the current Count t'Kint de Roodenbeke.
Notes: Ooidonk Castle (Dutch: Kasteel van Ooidonk) is a castle in the city of Deinze, East Flanders, Belgium. The castle is the residence of the current Count t'Kint de Roodenbeke. Ooidonk Castle is situated at an altitude of 11 meters. A fortress was first built on the site of the present castle in 1230, intended to defend the city of Ghent and to fortify the river Leie. This fortress was owned by Nikolaas van Hoendunc, lord of Nevele. After it was destroyed by Louis de Male, count of Flanders, Jean de Fosseux rebuilt and enlarged the fortress from 1381 onwards, adding moats, so that the castle could only be reached by drawbridge, and strengthening the defences with four towers. In the 15th century the castle came into the possession of the well-known French noble family of Montmorency, when Jeanne de Fosseux married Jean de Montmorency. In 1526 Philippe II de Montmorency-Nivelle, the well-known rebel, son of Joseph de Montmorency, Seigneur de Nivelle (died 1530) and of Anna of Egmond, was probably born at Ooidonk Castle. After the death of his father, his mother married Count Jan van Hoorn, who adopted her children. Philippe thus became known as Count Hoorn. He opposed the Spanish rule in the Netherlands and was finally decapitated in 1568 in Brussels. In the turmoil of religious wars the castle was destroyed twice, in 1491 and in 1579. After the fire of 1579 it was rebuilt again, and this building survives as the present castle.

How To Get To Ooidonk Castle (Map):