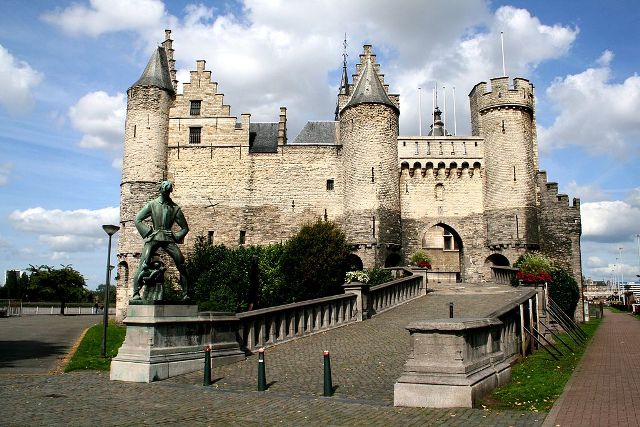 Location: Antwerp, Belgium.
Built: Early Middle Ages.
Condition: In good condition.
Ownership / Access: --
Notes: Het Steen is a medieval fortress in the old city centre of Antwerp, Belgium, one of Europe's biggest ports. Built after the Viking incursions in the early Middle Ages as the first stone fortress of Antwerp, Het Steen is Antwerp's oldest building and used to be its oldest urban centre. Previously known as Antwerpen Burcht (fortress), Het Steen gained its current name in around 1520, after significant rebuilding under Charles V. The rebuilding led to its being known first as "'s Heeren Steen" (the King's stone castle), and later simply as "Het Steen" (the stone castle). The Dutch word "steen" means "stone", and is used for "fortress" or "palace", as in the "Gravensteen" in Ghent, Belgium. The fortress made it possible to control the access to the Scheldt, the river on whose bank it stands. It was used as a prison between 1303 and 1827. The largest part of the fortress, including dozens of historic houses and the oldest church of the city, was demolished in the 19th century when the quays were straightened to stop the silting up of the Scheldt. The remaining building, heavily changed, contains a shipping museum, with some old canal barges displayed on the quay outside. In 1890 Het Steen became the museum of archeology and in 1952 an annex was added to house the museum of Antwerp maritime history, which in 2011 moved to the nearby Museum Aan de Stroom. Here you’ll also find a war memorial to the Canadian soldiers in WWII. At the entrance to Het Steen is a bas-relief of Semini, above the archway, around 2nd century. Semini is the Scandinavian God of youth and fertility (with symbolic phallus). A historical plaque near Het Steen explains that women of the town appealed to Semini when they desired children; the god was reviled by later religious clergy. Inhabitants of Antwerp previously referred to themselves as "children of Semini". An organization concerned with the historic preservation of Het Steen and Semini, Antwerp Komitee Semini in Ere (AKSIE), formed in 1986, holds annual celebrations at Het Steen as cultural events. At the entrance bridge to the castle is a statue of a giant and two humans. It depicts the giant Lange Wapper who used to terrorise the inhabitants of the city in medieval times.

How To Get To Het Steen (Map):